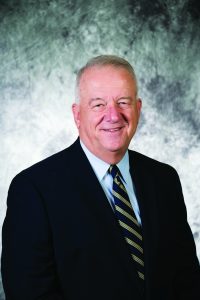 The Ascension Chamber of Commerce is welcoming a new member to their team. Robert Burgess will be stepping in to take the helm next week. Burgess is a long-time member of the capital region business community with a storied history of leadership. A native of Lafayette, Robert served as an active-duty Naval officer before a career in telecommunications as President and COO of Eatel (now REV) and Gulf Coast Wireless. He served as President and CEO of St. Elizabeth’s Hospital, and interim CEO of Woman’s Hospital in Baton Rouge.

“Robert has made it very clear that he is passionate about the Chamber staff. Helping them succeed is a priority.” said former Board Chair, Ronnie Daigle. “We are very excited for the direction that Burgess is going to take this Chamber.” The Ascension Chamber of Commerce is a very active organization in the community with almost 500 members, and a year-round event list. The Ascension Chamber provides resources and facilitates connections between businesses of all sizes and the Ascension community.

Former Chamber President, Anthony Ramirez has moved on to pursue other interests. The Chamber appreciates his work and wishes him well.